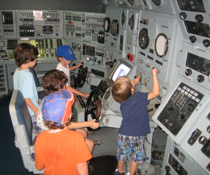 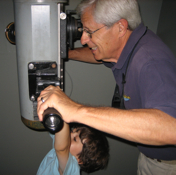 I recently visited the Navy Submarine Force Museum with grandsons and cousins’ grandsons — five boys between the ages of three and seven – along with their parents and other assorted grownups. OK, the disclosure is that for me it was part nostalgia, having retired fifteen years ago in a ceremony at the museum after spending a third of my thirty-year Naval career in Groton. That said, I highly recommend the museum as a destination visit for children (and adults). The five boys were enthusiastically entertained for 2Â½ hours with the ability to freely wander about, touch everything, “steer” a submarine, turn knobs, toggle switches, look through periscopes, and after two hours in the museum, have their own user-friendly listening device for the tour through the Navy’s first nuclear submarine, the Nautilus. There is also a large scale model of the Disney version of Captain Nemo’s Nautilus. The museum is spacious but not overwhelming, has “ship-shape” restrooms, is entirely kid friendly and has the added advantage of free admission, lots of video displays, and a gift shop with many moderately priced “sub-themed” souvenirs.

The museum is an easy trip from Providence, only a few miles off I-95 just outside the submarine base, and is open daily during the summer (closed Tuesdays during the winter). We also had a great lunch just a few miles away at Abbott’s Lobster – plenty of seating inside and out, on the water – and room for kids to run around outside. They will even provide free crackers so you can feed the fish.

Captain Richard Itkin served in the Navy as the captain of two submarines and a submarine tender (repair ship), on four other submarines prior to his command tours, and in various tours ashore.

Free family workshops about employment for youth with developmental disabilities

Training for parents with children and youth with behavioral health needs